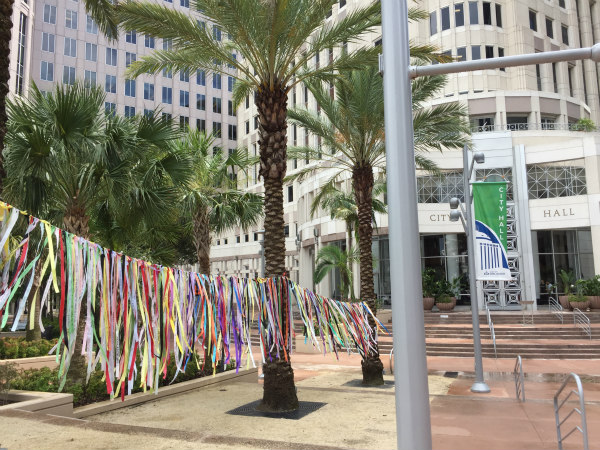 PROVINCETOWN — Provincetown, long considered a welcoming and safe place for the gay and transgender community, has again shown its support for the victims of the 2016 mass shooting in Orlando, Florida.

Nearly 3,000 colorful ribbons, including 49 black prayer ribbons to commemorate the lives lost June 12, 2016, at Pulse, a gay nightclub, have hung in front of Orlando City Hall this week to mark the anniversary. It is the second time the display has traveled to Florida.

The ribbons are part of the annual Swim for Life and Paddler Flotilla fundraiser in Provincetown. The event raises money for people with AIDS, women’s health issues and the community, according to founder Jay Critchley.

Since 1993, swimmers have been writing on 5-foot-long multicolored prayer ribbons to describe how AIDS has affected their lives. In 2016, black ribbons were inscribed with the names of the Orlando victims and attached to the collection during a ceremony in Provincetown.
The ribbons were then put on display in Orlando and Critchley met with victims’ families. The city invited the display back this year to commemorate the tragedy.
Collecting ribbons became a part of the Swim for Life in 1993, Critchley said. Each year people can add names to the collection.
When the ribbons are hung outside, they’re always moving, Critchley said.
“They’re witnessing what’s going on,” he said. 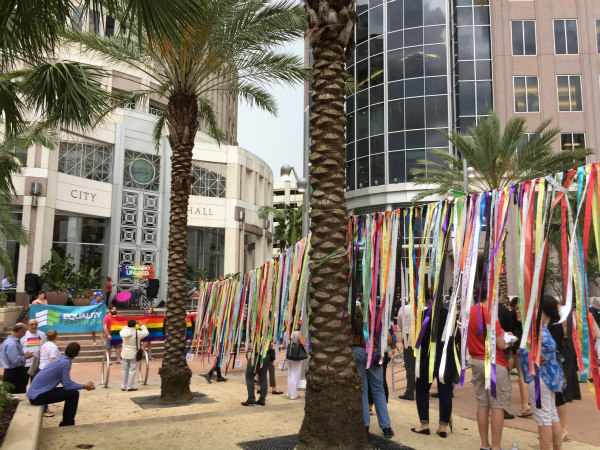 The prayer ribbons have become a meaningful part of the annual swim, said Jane Barber of Provincetown, who with her wife, Lynda Rohler, sponsors the ribbons each year. Barber attended the 2016 ribbon ceremony for the massacre victims and said reading the victims’ names and ages out loud was incredibly powerful. Comparing the ribbons to the AIDS memorial quilt, Barber said they can help “heal wounds of those suffering mass losses.”

Provincetown has had its own share of suffering. During the AIDS epidemic, the town lost many residents to the disease but was a “leader in compassionate care,” Barber said.
More than a symbol of the LBGTQ community, the ribbons are an expression of Provincetown’s inclusiveness, Barber said.

The exhibit creates a “sense of hope, love and relief,” said Luis Martinez, director of multicultural affairs for Orlando. Martinez lost two friends in the shooting, and although the ribbons make him emotional, they also make him happy to see the victims commemorated, he said.

The ribbons show the solidarity between Provincetown and Orlando and are welcome back, Martinez said, adding that the city would be happy to host them.
Critchley hopes to expand the prayer ribbons to include commemorations of the shooting victims at the Parkland, Florida, high school. 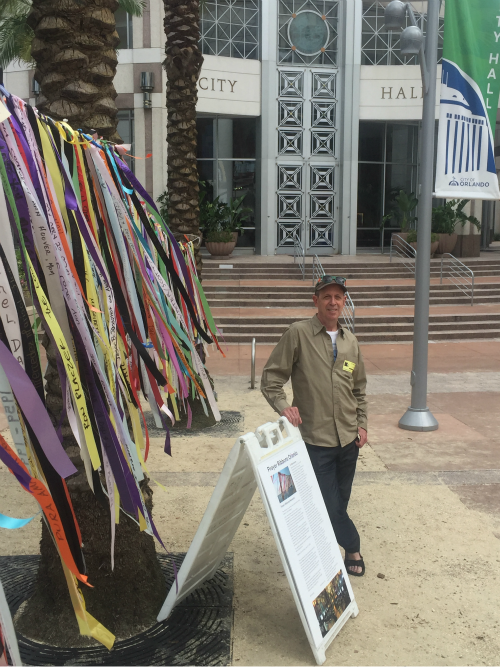 Lise King, Provincetown select-man, went with the ribbons on their first trip to Orlando and is currently making a film about the experience. Lise met with the victims’ families was deeply moving, she said. The ribbons are a visual representation of the collective feelings and inclusiveness of Provincetown, she said.

The ceremony was the town’s way of saying to Orlando, “We hear you, and we’re with you,” she said.

The ribbons will be on display in Orlando until Sunday, and the 2018 Swim for Life is scheduled for Sept. 8.