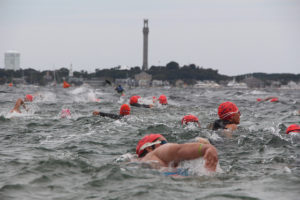 Over four hundred swimmers plunged into the warm but choppy waters of Provincetown Harbor at the 31st Provincetown Swim for Life & Paddler Flotilla on September 8. With 75 kayakers and over 40 safety patrol boats, the 392 swimmers arrived safely to cheering crowds at the Boatslip beach. All were invited to the Mermaid Brunch on the Boatslip deck, catered by Far Land Provisions, with entertainment by Zoe Lewis.

Highlights of the Swim include honoring Gene Landis of Amesbury, Massachusetts with The Compact Long Point Award for swimming twenty-five years, and presenting Cape Cod National Seashore lifeguard, Gordon Miller, with the David Asher Volunteer Award for organizing contingents of Lower Cape lifeguards for the Swim for twenty-six years. The Compact also welcomed leaders of its “Think-ubator” program, including Kristen Becker of Summer of Sass, Harriet Korim of Cape Cool and Stephen Cohen, who is researching the historic Long Point and Helltown communities.

The legendary Celebration of Life Concert, in its 25th year and produced by John Thomas, was held the evening before at the Unitarian Universalist meeting House. A 2018 t-shirt, with a design by artist Ellen LeBow inspired by Ellen’s humanitarian work in Haiti, was given to all swimmers, kayakers and volunteers.

The event raised an estimated $250,000, bringing the total raised since 1988 to over $5.5M to support AIDS, women’s health and the community.

Two US Coast Guard boats, along with four auxiliary Coast Guard boats and the full support of the Provincetown Harbormaster were joined by the Center for Coastal Studies and a phalanx of charter and recreational boats to provide emergency and safety support. Swimmer safety has become a heightened concern in light of the rising seal and shark populations in the area. The Provincetown Rescue Squad was on shore along with the event’s medical team.

“With safety our primary focus, we are blessed once again with the community’s support that brought our magnificent harbor to life,” stated Jay Critchley, director and founder of the Provincetown Community Compact, sponsor of the event. The Compact is celebrating its twenty-fifth anniversary this year.

Fifty-five swimmers and kayakers, who raised enough pledges to join the $1,000 Club, selected gift certificates from $10,000 worth of prizes donated by seventy-five businesses and individuals. Town officials, including Select Board Chair Louise Venden and Town Moderator Mary Jo Avellar.