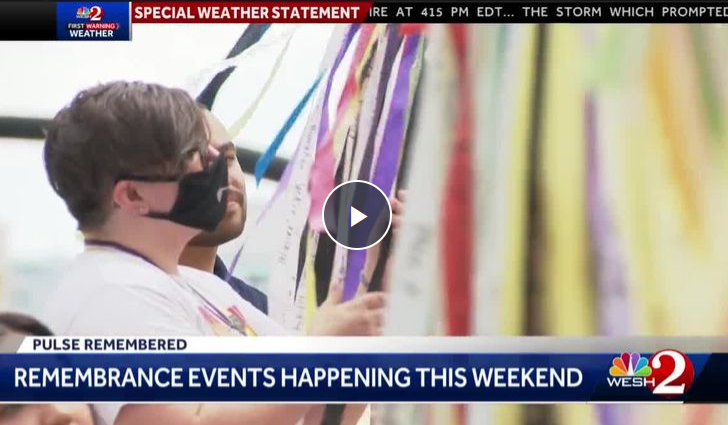 ORLANDO, Fla. — Church bells could be heard in the background during a moment of silence at Orlando City Hall.
"I continue to be proud of our community, we did not respond with hate or fear, we responded with love and compassion and unity," Mayor Buddy Dyer said.

Prayer ribbons are again in place in Orlando, waving in the downtown breeze, first sent 6 years ago from Provincetown, Massachusetts.

"The ribbons dance in the wind, and I think the angels are still dancing the night away," said Jay Critchley, of Provincetown.

There were messages of hope, unity, along with messages that change is needed.

"We have to do something in this country, about senseless gun violence, because it continues, over and over and over again, and this cannot be normal," City Commissioner Patty Sheehan said. Sheehan echoed what many have been saying as mass shootings are still at the top of our minds.

"Our country is being brought to its knees and it's about time we started resolving our differences through kindness and understanding rather than hatred and guns," Sheehan said.
Also to honor the Pulse victims, 49 crosses were delivered to Orlando days after the Pulse tragedy.
Part of the permanent collection at the history center, they're on display through Sunday.
"We want to make sure that we're shining a light on those efforts and the days and weeks following the local community response and the outpouring of support for those 49 individuals and all those affected by the tragedy," Jeremy Hileman said.

"That was one of the worst nights ever, but what I see now is a society of change and a society of people saying 'No more. This is who we are and this is who we're going to be,'" Laikin Wagenschnur said.

There’s no admission fee this weekend at the history center.
Sunday night there will be a memorial at the Pulse site.